What is Hydro Jet Sewer Line Cleaning and When Should You Do It? 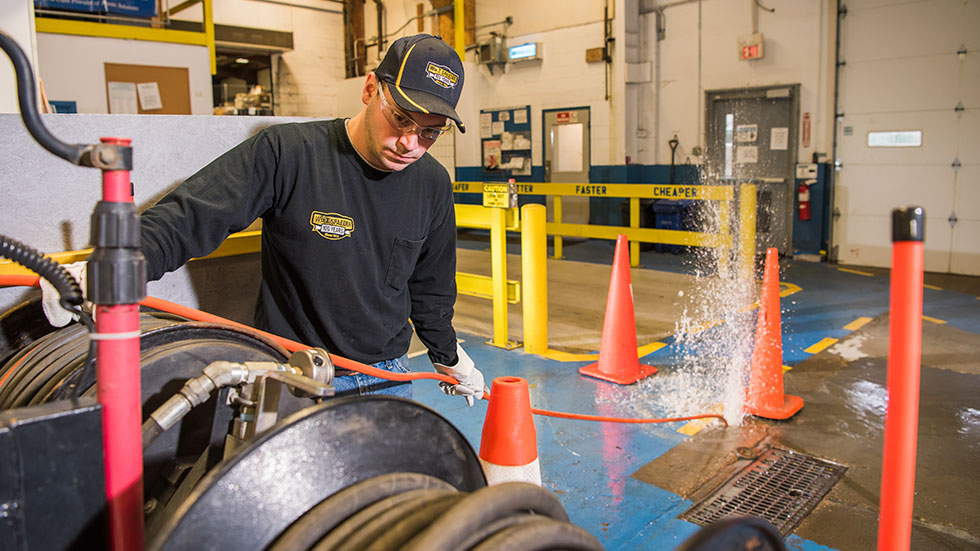 If you’ve never seen hydro jet sewer cleaning in action, you’re missing out. It can be almost magical to see all of the gunk, grime, tree roots, and grease get totally flushed out of the sewer lines. Hydro jet sewer cleaning gets rid of stubborn blockages and main line clogs with ease. A hydro jet is usually more effective for sewage backup cleanup than plumbing snakes, as well. In this article, we’ll talk about how hydro jets work and when you should expect to have a service done.

Hydro jet sewer cleaning relies on the power of pressurized water and nothing more. In fact, many industries use pressurized water to cut different materials, including metal and diamond. However, sewer water jet machines pressurize water at about 3,500 to 4,000 psi, while it takes at least 20,000 psi to cut steel.

A hydro jet sewer cleaning machine has a specialized nozzle that guides a hose through the length of a pipe to break up and wash away debris. The nozzle often has a single forward facing jet and multiple rear facing jets. The forward jet creates a hole through debris while the rear jets propel the nozzle forward and wash debris back.

To clean a main sewer line, the plumber will start from the lower end of the system and hydro jet up toward the building. Since the hydro jet washes debris back the direction it came from, this ensures the blockages will flow into larger pipes toward the city instead of back toward the building. For systems with septic tanks, the hydro jet will start from the septic tank opening. The service may include video inspection to see where the blockage is and what type of technique will work to clear it.

Often, hydro jet drain cleaning will take place in multiple stages. The plumber might use a nozzle with more forward force to initially break up debris like tree roots and sludge. Then, they could switch to one with a wider back spray to better remove those tree roots and send them down the pipe. Some nozzles are made for getting around corners and others are made for descaling the sides of pipes. The high pressure hose itself can also vibrate on and off rapidly, which helps the nozzle smash through clogs and debris.

Hydro jets only use water to clear clogged sewer lines. That means you don’t have to worry about any other chemicals getting into sewer pipes. Drain chemicals can damage sewer lines and cause problems for the environment if they aren’t contained.

Over time, old cast iron pipes can build up scale on the inside walls. The scale forms sharp edges that can catch toilet paper and other materials that go down the drain and contribute to blockages. Hydro-jetting cast iron sewer pipes is an effective way to remove scale and reduce edges for debris to grab onto. However, if the pipe is too old, you should avoid hydro jet cleaning as it could damage pipes that have cracks or are ready to break.

When Do You Need Hydro Jet Cleaning?

To keep your business’ main sewer line clear, it’s a good idea to get routine hydro-jetting every year or every other year. This is especially important for restaurants or other establishments that can accumulate grease in pipes.

If you don’t get an annual hydro jet cleaning, it can still be a good idea to choose hydro-jetting over snaking when you have a clog in the sewer lines. Hydro jet drain cleaning will completely remove the debris, and you’ll experience clogs less frequently. Snaking doesn’t have the same power of removing debris, and sometimes it just pokes a hole through the clogged areas. This allows water to flow for a time, but then you need to get the clogged sewer line snaked again.

Unlike drain snakes or drain chemicals, a hydro-jetting system should only be used by a professional plumber. In other words, don’t try to DIY your own hydro jet system or purchase a machine on your own. Professionals know the right technique and safety precautions to take. It also takes an experienced professional to do a video inspection and decide which types of specialized nozzles to use.

Is hydro-jetting safe for pipes?

Yes, hydro-jetting is completely safe for your pipes when done by a licensed plumber. The water pressure used is nowhere near enough to cut into a normal pipe. Hydro-jetting can be safer than using a metal snake in many situations, too. However, hydro-jetting should be avoided for very old pipes in poor condition.

How long does it take to hydro jet a sewer line?

It can take up to a few hours for a plumbing contractor to hydro jet a sewer line. Timing of course depends on the size and type of the blockage, size of the pipe, location of the pipe, and more.

Is hydro-jetting better than snaking?

Hydro-jetting is more versatile and more effective than snaking a sewer line. The multiple jets of water can break up and wash away debris much more efficiently than a metal snake. Hydro-jetting can also get rid of grease better.

If you’re dealing with tree roots, sludge, or mineral build up in your main lines, call our team at Spaeder for commercial hydro-jetting service. Our plumbers have experience in a wide range of industries in the Pittsburgh, Buffalo, and Erie areas, including healthcare, food and beverage, chemical, energy, and wastewater. From a detailed sewer scope inspection to specialized water jet sewer line cleaning, let our team unclog your main sewer line and get your business back on track. Reach out to a specialist here.

One thought on What is Hydro Jet Sewer Line Cleaning and When Should You Do It?